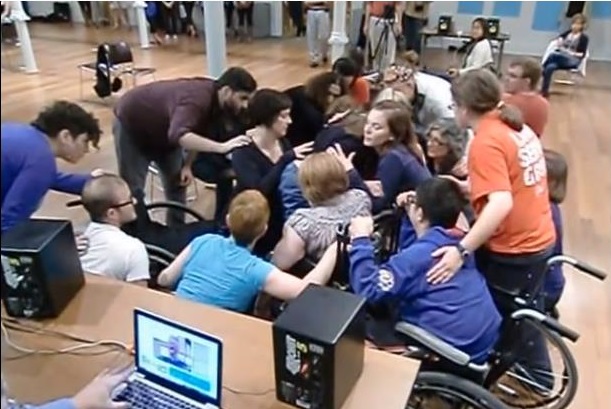 The public was invited to attend a free performance utilizing the AUMI and other mixed-ability improvisation tools and media on October 30, 2013 at the KU Commons, Spooner Hall, at the University of Kansas. "(Un)Rolling the Boulder: Improvising New Communities" was the culmination of a devised improvisation directed by Nicole Hodges Persley, Assistant Professor in the KU Theater Department, involving 20 participants from Lawrence, Kansas City, and other towns and cities in the area, who answered the call for performers for "Four Rehearsals and a Performance: No Experience Necessary!"

The approximately 80 audience members who attended the event were invited to choose where to enjoy the performance. Some lined the walls, and others selected seating from chairs that had been strewn throughout the space, facing different directions. Some clumps of seating had spaces between chairs that were wide enough for a wheelchair. Scraps of paper were on the chairs with text (some printed in Braille) with sayings such as "Ho, ho, hey, hey, ADA is here to stay!" and "If we were only spiritual beings, why would we have bodies?" Part of the improvisational nature of this performance was that the ensemble had collaboratively made all of the decisions pertaining to the show, from its title, to the selection of text, images, and sound files used in the program, to where the audience would be. The ensemble had wanted the audience to experience the performance interspersed throughout a performance space that presumed patrons of all abilities. They also decided they did not what the audience to know who was in the show. The audience was also invited to participate--and many did. 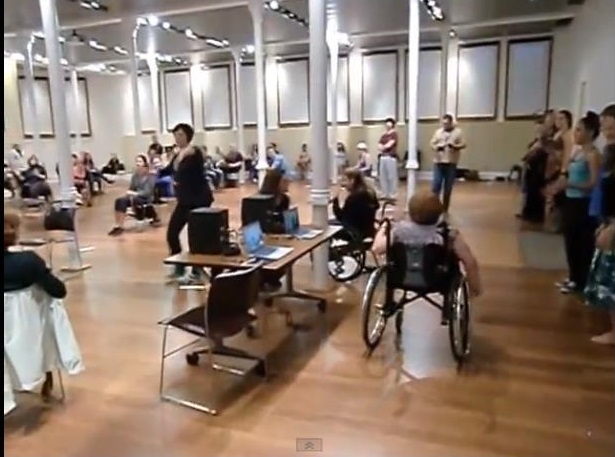 AUMI to Conga Line to Zumba

The performance began when several members of the ensemble began to play a musical instrument called the Adaptive Use Musical Instrument, a free software download from the Deep Listening Institute, that turns any computer with a camera into a musical instrument that adapts to all bodies. The performers played it while dancing around a table. A steady pulse emitted from a computer at the other end of the room, operated by Music Professor, composer Kip Haaheim, and several performers began to clap and dance. Audience members and the ensemble joined in, dancing Zumba moves led by JoAnne Fluke, Director of Groovability, Kansas City, and a member of the ensemble. 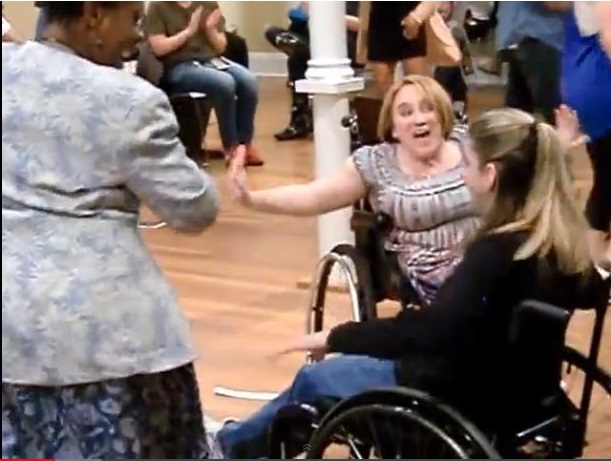 The high-spirited mood brought audience participation from all corners, further blurring the distinction between those who had come for the performance only, and those who had developed the improvisation over four rehearsals.

But the distinction grew apparent when the mood changed in the next movement (literally) as the action migrated southeast. In this corner of the room, performers--both wheelchair users and non-wheelchair users--weaved in and out of the columns that maintain the ceiling to Spooner Hall. A group of AUMI players provided a sound track of music boxes and children's voices, as the performers in the columns encountered one another, gliding from post to post. 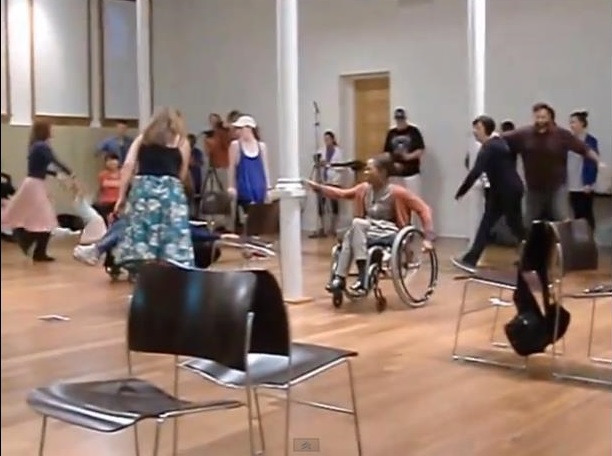 Soon, the sounds of playfulness gave way to a quotation from disability studies scholar Eli Clare, "Here's to Joy and Resistance," only the sound of the repeated quote was elongated and distorted. Brief duets began to form at a much slower pace, and a more somber tone. 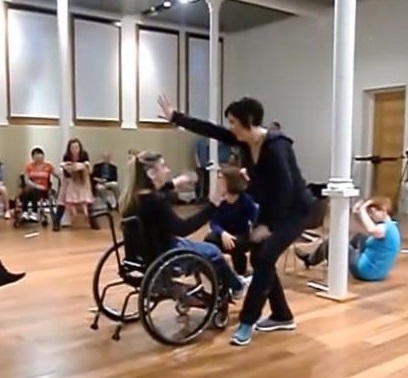 The audience did not participate so much during these interludes, especially when Director, Nicole Hodges Persley, and choreographer Michelle Heffner Hayes, Chair of the Dance Department, engaged one another in a contact improvisation duet in which Hodges Persley repeated the phrase "I can't be who I want to be until you are who you want to be," which was picked up and altered by Heffner Hayes as the two physically encountered one another in a dance of tentative trust. As the duet ended, the ensemble began to splinter apart and move East, to the acoustic ensemble of violin (Jamie Lloyd Simpson, Director of Accessibility & ADA Education, KU), brass (Music Therapy graduate, and former AbleHawks and Allies President, Elizabeth Boresow), and paddle-drum (George Li, Senior, Computer Science), as they played the second movement, allegretto, from Beethoven's 7th Symphony. Lloyd Simpson had selected this piece because of its use in the motion picture, The Fall, which addressed issues of disability. In UnRolling the Boulder, the piece served to summon the members of the ensemble to the corner of the room where the trio played the solemn movement. 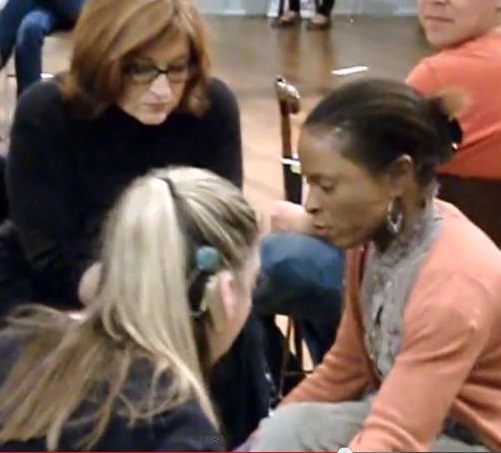 In case you are beginning to wonder about the "boulder" in the program's title, it is at this point that a human boulder began to coalesce as performers made contact and pressed in toward each other in front of the acoustic trio and the media stations operated by D-Jay, Haaheim and V-Jay, Trevor Grizzell (graduate student in Women, Gender, and Sexuality Studies). The boulder metaphor emerged at the first rehearsal when one participant observed that sometimes moving across the ableist (erected with the presumption of a particular kind of body with particular abilities) landscape was like "pushing a boulder," and another noted that sometimes "people were the boulder." After the second rehearsal, performers knew that a boulder of some kind would provide the pivot point of the experience. By the time they had to name the performance for the publicity, the phrase "(Un)Rolling the Boulder" had emerged as the action required for people to "Improvise New Communities" that were free from socially constructed blockages that kept communities apart. 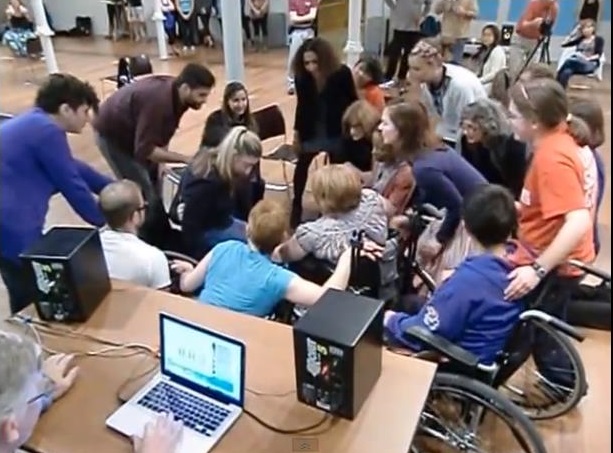 A call-and-response between AUMI set ups at the table where the performance began and behind the human boulder where the performance was coming to an end created an eerie overlay with the acoustic trio. Sound files emitted traffic sounds, quotations (such as the ones on the paper strips that had greeted audience members on their chairs, and even a recording of the the spoken word traffic light at 11th and Kentucky--"Stop!"--ping-ponged across the room as the performers pressed inward, and one, Lorrie Sparks, body surfed upwards into her cast members arms and back. 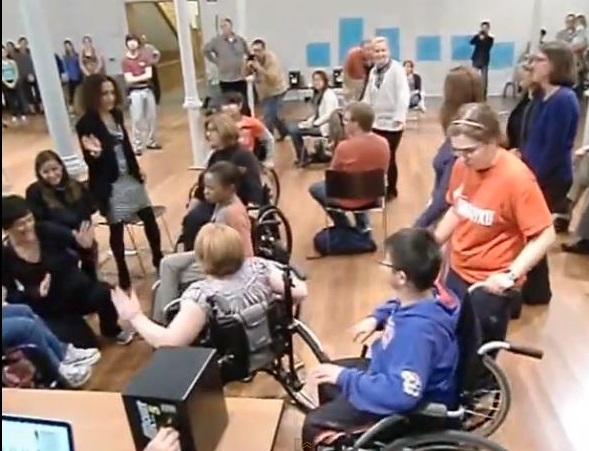 At this point, another Zumba music track began and the cast broke apart, dancing with gentle exuberance that led them back out among the audience. Members of the audience joined them in the dance until the ensemble filed out of the hall. The audience exploded in warm applause.

When the ensemble re-emerged, most of the audience joined them in a circle for a post-performance discussion about the process and aims of the "(Un)Rolling the Boulder: Improvising New Communities."

Questions included: "Where did the idea come from?" "What further projects do you have in mind?" "How might the AUMI be used to inspire and create such communities and learning experiences across campus on a more regular basis? Many expressed interest in participating in such a performance if it was to be held again next year. Of course, because it was an improvisation, shaped by the community that came to all four rehearsals, it would be different. 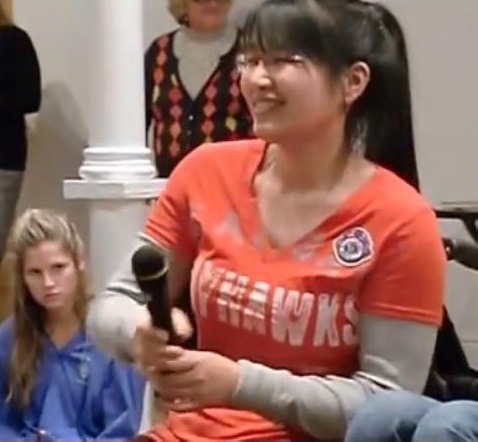 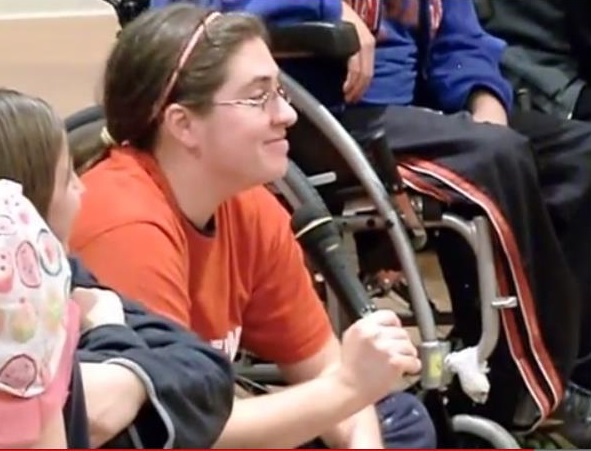 Performers talked about the intimacy of the experience, the decisions they made in the process of creating it, and what the improvisation over the four rehearsals and performance had meant to them. They also talked what they hoped the audience would learn, what they learned from one another, and from the experience of performing in a show where the point was not to outperform anyone, but to co-create a multi-media, mixed-ability community.

A project of AUMI-KU InterArts, "(Un)Rolling the Boulder: Improvising New Communities" was co-Sponsored by the Commons, the Office of Institutional Opportunity and Access, the College of Liberal Arts and Sciences School of the Arts, AbleHawks & Allies, Independence Inc., and the Department of Dance.

A beautiful, hilly campus is just one reason why Jayhawks fall in love with KU. Find out more.

Please join us Friday, August 11th at  5:30 for a 30-45 minute performance, followed by audience feedback and discussion.  The performance features Jesse Stewart and the Wooden Snap Dragons Ensemble.